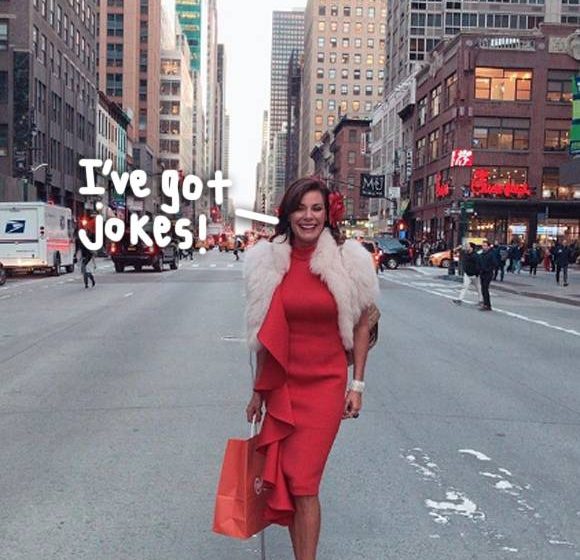 Luann de Lesseps is back to her “cool” self, after having a pretty “uncool” 2017.

On Tuesday evening, the Real Housewives of New York vet debuted her #CountessAndFriends cabaret show at Feinstein’s/54 Below in NYC. It’s said the 52-year-old dressed in a nude diamanté dress and a tiara, proving she’s the confident Countess once more. YASSSS.

After opening her show with The Beatles’ With A Little Help From My Friends, de Lesseps transitioned into a medley of her own hits. She also remarked:

“I feel so much love in here.”

Luann certainly had her friends’ support, as Michelle Collins, Sonja Morgan, Kelly Bensimon, and ex-boyfriend Jacques Azoulay were all in the audience. What’s even more impressive is that the Bravolebrity wasn’t even afraid to poke fun at her drunken December arrest. At one point, the TV personality quipped:

“I had a list of songs but had to reconsider Jailhouse Rock.”

In case you forgot, Luann found herself in jail on Christmas Eve after getting physical with a first responder while intoxicated. This scandal occurred months after announcing her split with husband Tom D’Agostino. Regardless, the Countess is aware that she messed up, as she further joked:

“I fought the law and the law won. Crazy for thinking I could get out of those handcuffs.”

We’re glad to see that Luann can see the humor in all of this. The reality TV star didn’t shy away from talking about her rehab stint either. On life post rehab, the mother of two noted:

“Not drinking is exhausting. Getting up at six and going to my meetings and to yoga and then filming Housewives. I’m dead by ten o’ clock I’m wiped out, I’m exhausted. And usually, I’m just starting at the Regency at that time.”

“Calm down Sonja, the show can’t afford to send two of you to rehab.”

This is the best Broadway show I’ve ever seen SORRY CATS!!!!!!!!!!! @sonjatmorgan got a DESERVED STANDING O!!!!! @countessluann just left for another costume change lol this show delivers on every level #countessandfriendsA post shared by Michelle Collins (@michcoll) on Feb 27, 2018 at 8:03pm PST

HIGHlarious! But it was Luann who had most of the jokes, as she added later on during a costume change:

“My dress is from my latest collection it’s called the ‘I lost ten pounds from rehab collection.'”

In addition to her musical numbers and jokes, de Lesseps also read excerpts from her diary throughout the years. Oooh, juicy stuff!!

Luann ended her fun cabaret performance with a Real Housewives burn of her own:

“Just like the show the Real Housewives of D.C., the show must come to an end.”

Oh snap! We’re so thrilled to see how well the Countess is doing in 2018.