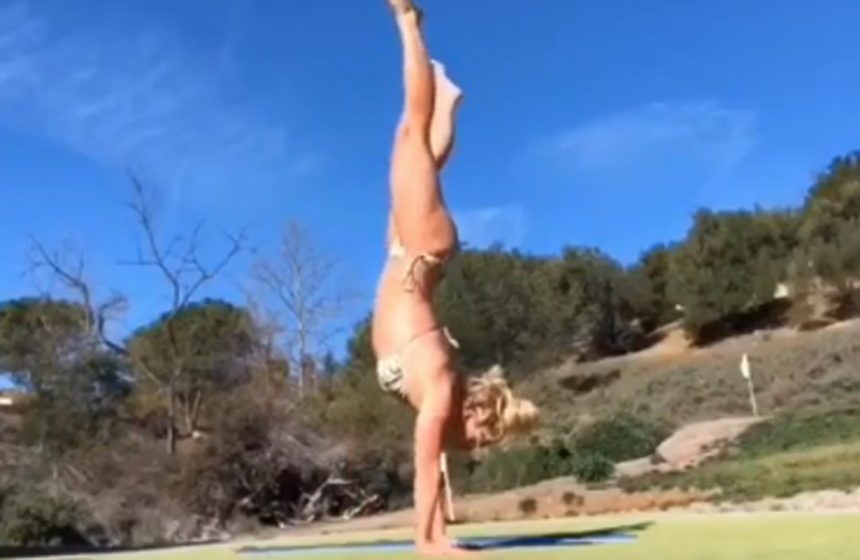 Don’t call it a comeback!

Britney Spears appears to be in particularly high spirits this weekend, now that she’s back home after her stay in a mental health facility ended late last month. In fact, she’s doing plenty of yoga and seems to be having a ball, at least on social media, which is great to see!!

The Baby One More Time singer showed off some advanced yoga poses on her Instagram account on Saturday afternoon, clearing enjoying her weekend under a cloud-less sky with sunshine and all the amazing weather that so often comes with late spring — and she’s clearly getting very strong, athletic, and well-balanced from practicing quite a bit of yoga recently!

Ch-ch-check out Brit’s amazing yoga moves on the mat in her video (below)!!!

Yoga on the green

Wow! Impressive! Gotta be strong and athletic to do that… kudos, Brit!!!

And with a Cardi B soundtrack to boot! Now that’s how you do yoga — and have yourself a nice, fun little Saturday! We really like it like that, too! Ha!!!

Miley Cyrus was clearly feeling it on Saturday, when — at the Beale Street Music Festival in Memphis, Tennessee — she shouted out the #FreeBritney movement in the middle of her crowd-pleasing performance of Party In The U.S.A.!!!

According to reports from people who were on the scene in Memphis for the show, Cyrus shouted out ‘Free Britney’ during the chorus of the song, as her fans sang the normal lyrics from out in the crowd… giving a little more life to the ongoing conspiracy theory that Spears was somehow held against her will in that mental health facility!

And, of course, showing off another moment here where Cyrus clearly lands on the side hoping for good health and no drama in Spears’ conservatorship — especially during and immediately after her month-long mental health hold.

Related: Brit Is Moving Forward, Has No Fear Of Repeating What Happened A Decade Ago

Dramatic! Not a huge crowd reaction to it at the time, but you can watch video of the moment HERE!

Well, there you have it, Perezcious readers! What do U think of Brit’s impressive yoga capabilities?? And what about Miley (and other celebs) who have now shown considerable public support for Britney in various venues and at various times???

Sound OFF on everything Spears-related and then some by sharing your opinions with us in the comment section (below)!!!  Can’t wait to hear from you!!